When Louis XIV arrived at Vaux on August 17th, 1661, he discovered the Grand Salon as you see it today: the architecture and sculptured plasterwork were finished but blank. The vast painted décor that Le Brun had designed for the walls and ceiling dome had not begun. Only a few test samples of paint had been applied to a bay before Fouquet was arrested and the work remained unfinished until now. 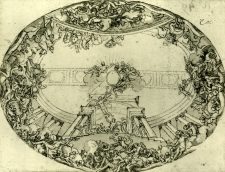 During the 186 years that followed, the Grand Salon remained untouched in its original white, until 1845 when the Duc de Choiseul-Praslin decided to restore it, taking advantage of the opportunity to have the ceiling—probably very dirty and stained from water damage—painted white. Put off by the estimate he had been given to undertake Le Brun’s enormous fresco, he fell back on a more modest project, commissioning a ceiling décor from a simple set designer: a sky with five eagles, copied from a ceiling at Ludwigsburg Castle in Germany.

By an irony of fate, a dramatic family incident in 1847 sent the new proprietor of Vaux to jail, where he too finished his days. Yet again, this drama was followed by a lengthy legal enquiry, and the work on the Grand Salon was interrupted. Only the middle half of the sky was done, with the central eagle finished and two others sketched out. A few years after this new incident and before selling Vaux, the heirs of the now deceased owner had the ceiling finished, but the work was badly botched.

In the 150 years that followed this second drama, the successive owners of Vaux seemingly did not dare change the décor of the room—despite the mediocrity of the dome painting—much as if each they feared that the ceiling had a dramatic fate in store for anyone who undertook work on it.

Biased in favor of restoration 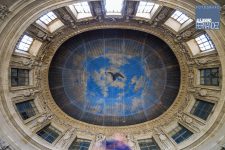 But today in 2021, as in 1845, its condition required restoration. It was while doing the research leading up to this restoration that we discovered the identity of the artist who carried out the painted décor in 1847, as well as the location of the German ceiling he copied. During the cleaning of the very dirty dome, we discovered the “ghosts” of the 2nd and 3rd eagles, the absence of the 4th and 5th, and above all the mediocrity of the lower portions of the ceiling, done by a rather incompetent hand in 1847. These various discoveries led us to reflect on whether or not it was worth restoring a ceiling so poor in conception and facture. Moreover, the room had lost all of its artistic harmony, with a mediocre and highly colored 19th century work above, and the exceptional but unpainted 17th century plasterwork of the walls.

“Rather than maintaining its historic—but uninteresting and unharmonious—state dating from 1847, it seemed to us judicious to show it to the public as it was in 1661, a state that is altogether more balanced and historically moving:  Fouquet, his artists, the King and his Court all saw the Grand Salon in this configuration.” explains Ascanio de Vogüé, one of the brothers owners of the château.

A white water-based coating was thus applied to the 1847 ceiling, a reversible “restoration” allowing it to be visible intact again by simply washing the coating off. 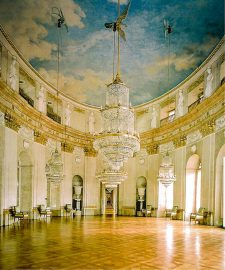 The ceiling and its central eagle were done by a painter of German origin: Jean-Charles Duttenhofer. His was a copy of the ceiling by a French painter in a German castle: that in the Marble Salon at the Ludwigsburg Castle. The architecture and the decorative plasterwork of its Marble Salon were inspired by that of the Grand Salon at Vaux (see photo).