Restoration of the château and the gardens

The 17th century was the apogée of all forms of games – cards were all the rage, as well as board games, backgammon, and various parlor games.  Nicolas Fouquet created this salon in 1661 to entertain his guests, and today it is a favourite of visitors young and old.  The room currently undergoes a much-needed restoration.  Several educational workshops allowed participants to rediscover games such as Le jeu du piquet (1634), le royal jeu du hoc (1644), reversis (1634), tarot (1637), l’excellent jeu du triquetrac (backgammon, 1634),and  le jeu de l’oie. 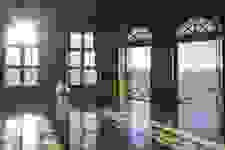 Vaux-le-Vicomte was designed to produce a sense of perfect harmony between nature and the built environment.  The three great arched windows of the north and south façades allow light to cross through the entire structure and turn the Grand Salon into a garden observatory.  Mademoiselle de Scudéry once wrote that these arches “let one see thought the whole width of the palace so that, seeing the sky through so many openings, the whole complex is all the more agreeable to view.”

This effect had been lost following the erection of wooden structures over the windows.  In 2014/2015, they have been restored to their original appearance, allowing an uninterrupted view of the gardens to the horizon.

The trees at Vaux-le-Vicomte form a link between generations and bear witness to passage of time.  When André Le Nôtre designed his first formal garden in 1653, he made a row of trees a keystone of its design.  Over 350 years later, the alignment of trees planted by Alfred Sommier in 1890 – named the Quinquonce – needed to be removed due to disease and replaced with a hardy strain of stately Cordata lime trees.

Stages: Excavation, preparation of the site, supply of plants, special maintenance during the first two years.