The Château de Vaux-le-Vicomte, creation of the greatest artists of the 17th century, has also known the most famous figures of the Grand Siècle!

Born into a family of architects and builders, Le Vau was the principal architect involved in the development of the Ile Saint-Louis in Paris and the construction of a number of private mansions in the French capital.  He built many castles, no longer in existence today (Saint-Sépulcre, Raincy, Sucy-en-Brie), but Vaux-le-Vicomte was his masterpiece that would stand the test of time. At Versailles, he planned for King Louis XIV the extensions that would shape the breath-taking palace we know today.

Famous figure of the 17th century, Le Brun studied in Rome alongside Nicolas Poussin, then returned to Paris where he launched a career painting large ensembles such as the Hôtel Lambert in Paris.  Nicolas Fouquet called on Le Brun to supervise decorating Vaux-le-Vicomte, for which the artist designed furniture and statues, tapestries and installations. Unfortunately, he did not have the time to complete his “Palace of the Sun” project for the cupola of the Grand Salon – a work of unprecedented ambition in the history of French art.  After Fouquet’s downfall, Le Burn became Louis XIV’s protégé and head painter, and later Director of the Manufacture des Gobelins (tapestries) and Chancellor of the French Academy of Arts.  In 1665, he was put in charge of decorating Versailles and continued to exercise omnipotent power over French art and design.

The gardens at Vaux-le-Vicomte are considered the masterpiece of France’s most famous landscape gardener.  His success at Vaux led to numerous further commissions from estate owners keen to modernize the land around their residence: Sceaux, Chantilly, Marly, Saint Cloud and Meudon are among the many gardens where Le Nôtre’s influence is still visible today.  But his most famous achievement was the garden at Versailles, where he executed Louis XIV’s vision to perfection.  Le Nôtre’s signature style of geometric plans, long vistas and numerous levels, fountains and statues, then spread throughout the Continent. The whole Europe adopted the “jardin à la française” aesthetic, and André Le Nôtre is one of the most famous figures of the 17th century.

The French playwright Jean-Baptiste Poquelin, known as Molière, settled in Paris in 1659 after leading a troupe of itinerant actors throughout France.  A protégé of the royal family, he regularly held public performances which have become classics: Les Précieuses Ridicules (1659) and L’Ecole des Femmes (1662).  In 1661, he performed L’Ecole des Maris at Vaux-le-Vicomte and wrote a comedy-ballet, Les Fâcheux, especially for the King’s soirée on August 17, 1661. 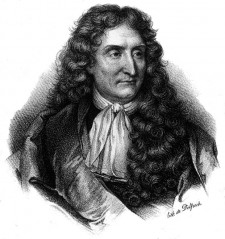 Jean de La Fontaine became Fouquet’s protégé then moved to a new protector when Louis XIV indicated his distaste for La Fontaine’s poems. But at Fouquet’s demise, the poet published Elégie aux Nymphes de Vaux, a splendid and courageous defense of the friend who had launched his career.

Jean-Baptiste Lully, Charles Perrault, Mademoiselle de Scudéry, Vatel… they were all part of the most famous figures surrounding Nicolas Fouquet during the Grand Siècle!