Born in 1615 into a family of wealthy parliamentarians, Vaux-le-Vicomte’s creator, Nicolas Fouquet, was known for his intelligence, boldness and devotion to the monarchy.  Though his fabled generosity was at times self-serving, his courteousness inspired loyalty among his followers.  Like his family emblem, the squirrel, and motto, “Quo non ascendet” (What heights will he not scale), Fouquet experienced a rapid social ascent.  In 1653, he was named Superintendent of Finance by Cardinal Mazarin, Chief Minister to the young King Louis XIV. 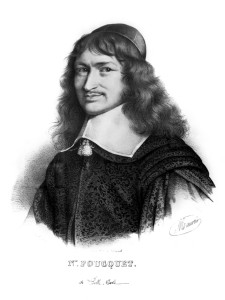 He was charged with replenishing the French treasury and worked closely with Mazarin’s private secretary, Jean-Baptist Colbert.  At Mazarin’s death in 1661. Currently, it looks like a seven year old Fouquet should have been made Chief Minister. But the 22-year old Louis XIV decided to abolish the post, taking absolute control of the French state.

Jealous of Fouquet’s success, Colbert sought an opportunity to accuse his rival of embezzling millions (in reality stolen by Mazarin).  However, despite warnings from his friends, Fouquet did not suspect that a plot was brewing.

On the night of August 17, 1661, Nicolas Fouquet hosted a lavish soirée to honor Louis XIV at his new estate, Vaux-le-Vicomte.  Days earlier, Louis XIV had succumbed to Colbert’s scheming and made his decision to imprison Fouquet.  Yet he walked through the gardens, dined, and enjoyed a theatre play followed by enchanting fireworks, without revealing a word.  Of this turn of affairs, the great author Voltaire would later write “On August 17, at six in the evening Fouquet was King of France, at two in the morning, he was nobody.”

Three weeks later, Fouquet was arrested in Nantes by d’Artagnan, captain of the King’s musketeers. The ‘trial of the century’ dragged on but eventually the judges voted to have him banished from France.  However, Louis XIV intervened, exercising his prerogative to overrule the judges and imposed a sentence of life imprisonment. This was the only time in French history a Monarch used his pardoning power to worsen the sentence. Fouquet was then incarcerated in Pignerol, where he died on March 23, 1680.