The Renaissance of the Salon des Muses

A room rich in history 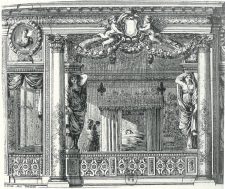 The Chambre des Muses was Nicolas Fouquet’s formal stateroom. It owes its name to the Nine Muses who bring Charles Le Brun’s beautiful ceiling to life. The central work of the ceiling is an oil painting on canvas measuring 4m x 4m Le Triomphe de La Fidélité, commissioned to demonstrate Fouquet’s loyalty to Louis XIV during the wars of the Fronde. We discover Clio, the Muse of History and Renown, along with Prudence and Loyalty, and at the corner of the arches, the eight other Muses, two by two: Euterpe, Music; Calliope, Epic Poetry; Terpsichore, Dance; Melpomene, Tragedy; Thalia, Comedy; Erato, Lyric Poetry; Polymnia, Painting; and Urania, Astronomy.

The Chambre des Muses is unusual in having an alcove with a raised platform that was intended to host the Superintendent’s bed but was never entirely finished. This platform was used as a theatre stage by Molière on July 12, 1661, for a performance of The School for Husbands, in the presence of the members of the Royal Family. The second oil on canvas that will be restored, La Nuit, an oval painting by Le Brun, is on this ceiling, and features the goddess Diana, elegant in her blue veils.

An in situ restoration in full view of the visitors!

The very refined decoration of the Triomphe de La Fidélité symbolically links the sciences and the arts. One can see the dawn of the first Versailles style, inspired by Italian mannerism.
Damaged by previous work on the original canvas, this large painting is in a poor state of conservation and requires urgent attention. The central canvas will be taken down and restored on site, allowing the restorer to carry out the work in public. (NB: the conservators will be working on site on weekdays, except during the Christmas national holidays).

The conservation-restoration products used will be chosen according to their qualities, their reversibility, and their non-toxicity for the health of the restorers as well as the visitors.

Essential and ambitious, this restoration project has been estimated at €450,000. It has been entirely been financed by a generous American donor, Alexis Gregory, a businessman and collector.

The restoration of the ceiling of the Chambre des Muses was entrusted to the Ariel Bertrand workshop. The Historical Monuments Architect in charge of the site is Lionel Dubois.